This was one of our first attempts. 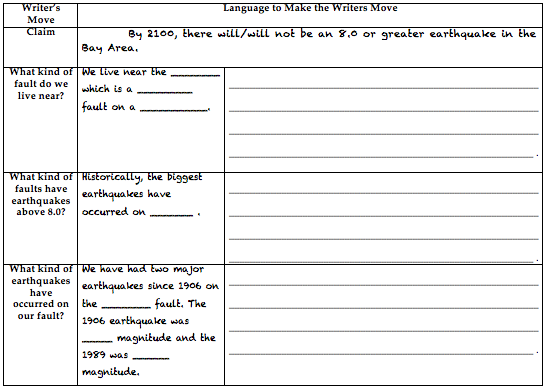 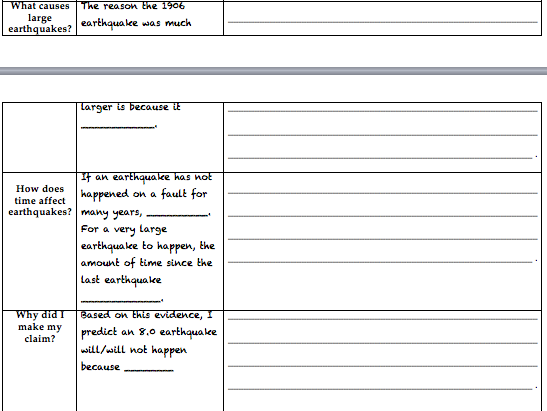 It was our sixth graders' first or second try at extended science writing. The ease of entry here was very high. The downside is obviously that it is mostly fill in the blank. Except for the last frame there wasn't a lot of room to move. Also the writing itself is pretty clumsy.

We pulled two main lessons from this.

1. Start with a graphic organizer or build the template together. The tool made the writing process too invisible which is almost always a bad thing. The counterpoint to that argument is that we got the writing done first and then we could go back and deconstruct the setup. As a first attempt for the students, this might have been the way to go.

2. The academic support words were also too invisible. Constructing Meaning calls this the "mortar." We want students to gain flexibility with the mortar so they can use it on their own. 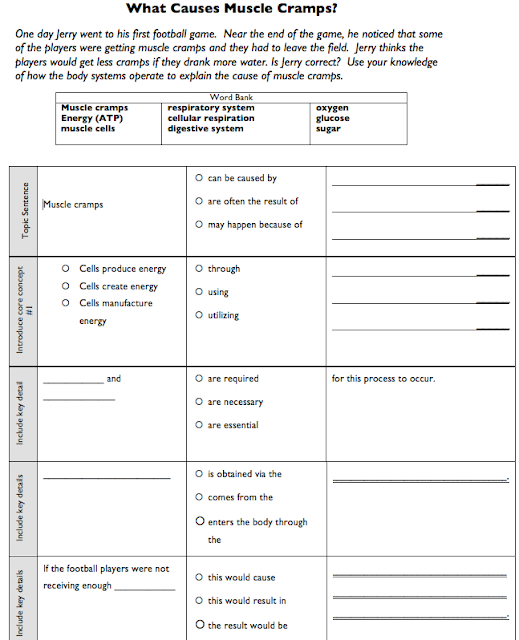 This is just the first page but the back is similar. In this one we kept the headings on the side to highlight the purpose. We also pulled out the academic support words and gave them choices. This is probably our most used format. We've also been integrating in rebuttals so that's been very nice.

Below is an even more generalized example. The topic sentence is removed. The only things that change here are the word bank and perhaps some of the support words. I don't know what the topic was but the bio people can probably take a good guess. 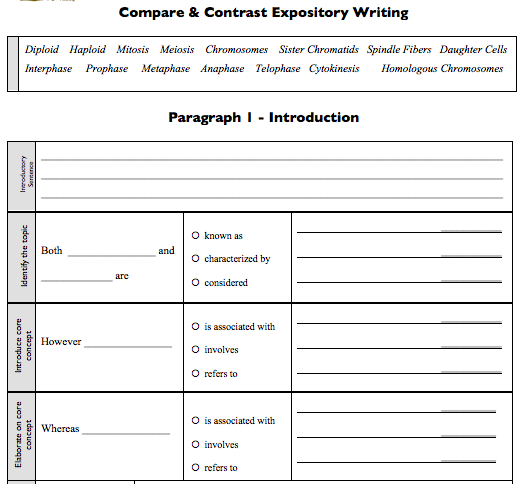 We go back and forth about word banks. We've been happiest with "you can use all, some, or none of the words but if you're using all or none you're probably doing something wrong."

Most recently we gave all of our sixth graders a prompt from the textbook about whether or not the government should provide flood insurance. This came as part of a literacy unit we did where they read multiple articles with opposing viewpoints. The other sixth grade teacher and I approached it differently. Hers: 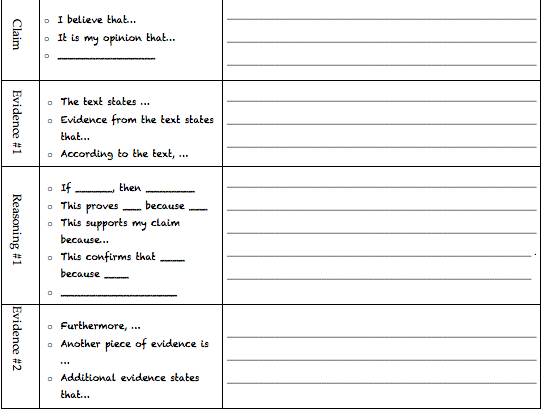 On my end, all they got was a graphic organizer. Below is the bottom portion. The rest was two more sets of the argument/counterargument/reasoning triangles. They provided an argument and counterargument and for the reasoning they wrote about which side was more convincing.

I put the claim at the bottom because I wanted them to go through each argument first before deciding on a claim. The numbers correspond to the sentence order in their final paper. I also provided about two dozen different sentence starters they could choose from (if needed). For example, "An argument in support of government provided flood insurance is_____. Others might respond that________. ___________ is more convincing because_______________."

I was very happy with the results here. It balanced structure and freedom pretty nicely. For this assignment we also engaged in a class debate first and students were able to gather arguments/counterarguments from the debate. In their papers, I asked them to cite other students as sources of arguments or counterarguments.

If there's anything I've gained from the last couple of years where I've focused on writing it's that speaking comes first. I can't stress that enough. Most of the tools above work just as well for speaking.
Posted by Jason Buell at 10:40 PM 2 comments: