We've got about 6 weeks before our state tests so I just sent out an email to the other two teachers in my department detailing a list of standards they need to teach and how those standards will be assessed. I had to say things like, "Skip inertia because it is not tested." I'm feeling a little dirty right now. On the plus side, it reminded me of one of my favorite test prep techniques.

I call it Make it Right but I'm sure it goes by other names. The instructions are simple. After selecting the correct answer the students need to rewrite the question so that the other choices now become correct. Example: 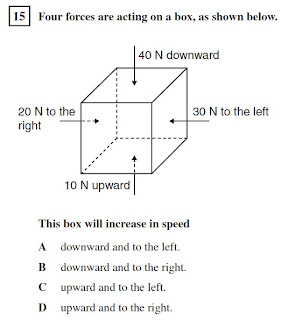 After selecting A as the right answer, they then redraw the problem three times to make the answer correct for B, C, and D.
This year, with my spanking new whiteboards, I'll just assign each kid a letter and have him/her take that letter for every question (Student 1 is responsible for all the A responses, Student 2 for all the B responses, etc). We can quarter the whiteboards and have the kids share around their four-person group.
Sometimes it gets a little weird like in this one: 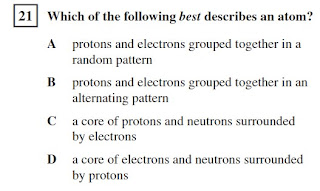 There really isn't a situation (at least that would ever come up in our level of science) where anything but C would be correct. In this case I just ask them to justify why A, B, and D can't ever be the correct answer.
My only other guide is that they should keep the spirit of the question intact. Thus for: 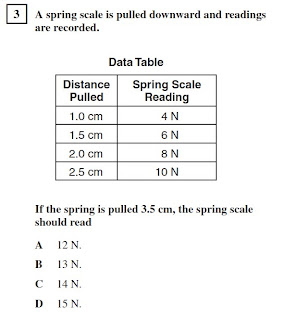 I want them to try to adjust the numbers in the table, rather than, for example, write an F=ma problem where the answer is 13 N.
Even for the plug and chug questions, this exercise takes a good amount of understanding and number sense. I don't feel bad about doing it and when asked I can say that I've been test prepping so it's a win-win.
Any other test prep suggestions are welcome.

Disclaimer - I'm not a big believer in test prep, but my school is. We're a "persistently low-achieving school" according to various governing bodies so I don't fault them for feeling the squeeze. One of the things the higher ups in my district think might be helpful (editor's note:no comment) is to print out a copy of the released test questions [pdf] for every CST a student will be taking. So every 8th grader has 4 packets (math, ELA, science, social studies) crammed into the bottom of his or her backpack. Since my school spends 4 digits on these copies (editor's note:again, no comment) I feel I should use them somehow. They could have at least thrown me a bone by removing the multiple choice answers but alas......
Posted by Jason Buell at 9:45 PM 8 comments:

Email ThisBlogThis!Share to TwitterShare to FacebookShare to Pinterest
Labels: cst

I got a couple of new students last week. Both are brand new in the country and understand very little English. I'm hoping someone out there in internet-land can point me to some physical science resources in Vietnamese.

I'll take pretty much anything. Digital or print. I have a Vietnamese-English glossary and a few helpful bilingual students. Mostly though, they just stare at me.1

Anything at the 8th grade intro level for....

I'm also struggling with helping them socially. The kids who come in from Mexico find a place pretty quickly. These two kids are truly "foreign." Oh and it's just coincidence they both came the same week. They are strangers, opposite sex, and have no befriended each other at all.

1: I teach in a majority EL district, but that majority is almost entirely Spanish speaking. Before we cut a science teacher, I used to have a class devoted entirely to the CELDT 1 and 2 groups. I've always felt that teaching ELs was one of my strengths. It's been an incredibly jarring experience to feel completely lost here.
Posted by Jason Buell at 9:23 PM 2 comments:

Email ThisBlogThis!Share to TwitterShare to FacebookShare to Pinterest
Labels: help

The Problem with Creating Problems

Words of warning, I have no answers here. I'm just thinking out loud and wanted to post a quote for future reference.

The third chapter of The Art of Problem Posing begins with an anecdote of a speaker relating the following observation to a group of math teachers:


There are nine Supreme Court Justices. Each year, in an act of cordiality the Supreme Court session begins with each judge shaking hands with every other judge. (p. 19)

He then asks what the question was for this setup.

What would you ask?

If you're like me you asked the, "How many handshakes..." question. The book states that the question was so obvious the speaker treated it as rhetorical, stated the question himself, and moved on with his talk. The authors then drop kick me in the head with this:


Many of us are blinded to alternative questions we might ask about any phenomenon because we impose a context on the situation, a context that frequently limits the direction of our thinking. We are influenced by our own experiences and frequently are guided by specific goals (e.g., to teach something about permutations and combinations), even if we may not be aware of having such goals.

The ability to shift context and to challenge what we have taken for granted is as valuable a human experience as creating a context in the first place. (emphasis added because it's so awesome)

I had a strong reaction to reading Ashli's experience working with Dan Meyer's Boat in the River problem. When I sat in to watch Dan present this video (IIRC, there were about 20 of us and presumably, most of us were teachers), the "right"question was asked by nearly all of us. I recall being shocked that Ashli's students were so all over the place and only one group got the "right" question.  In her shoes, I can imagine myself being mildly irritated at what appears to be kids shouting out random questions in attempts to be, ummm, kids.

Look at this question - "Why does he put the headphones in?"

I would definitely get this question. I would get it from the kid who is always trying to not-so-smoothly listen to his ipod by resting his head on his hand and running an earbud through his sleeve. He'd probably follow up the question with a statement about how Dan's ipod is old and the newer gen is much better. I'd be dismissive and move on.

Except.... I'm the one at fault here. It's actually quite interesting why he needs headphones and is certainly worth investigation. Discovering that Dan needs to maintain a constant speed only enriches the problem that I had intended for us to investigate originally. If you want to get crazy, the followup question, "What if he didn't maintain a constant speed?" opens up a whole new, and perhaps more interesting, investigation.

My tunnel vision is only exacerbated when I've taken the time to develop and create the problem myself. It's fairly easy for me to divorce myself from a lab I found on google. On the other hand, when I've taken hours to create a lab or demo in order to launch a specific investigation, I find myself invested in the idea that this demo so wonderfully elicits the question I'm hoping my students will ask so I can teach the thing I wanted to teach.

Stepping back and allowing the process of problem solving and problem posing to grow organically is something I struggle with daily.

It hurts my brain to think about how often I've limited questions because I've imposed my own context.
Posted by Jason Buell at 8:59 AM 5 comments: