This week I spent three days at the Institute for Teachers of Color Committed to Racial Justice (FB page). I'm still trying to process everything and decide what I can share.

The first session I attended was taught by the amazing Artnelson Concordia at Balboa High School in San Francisco. One of the things I learned about was his use of the unity clap and isang bagsak.

The UFW originated when the mostly Latin@ NFWA merged with the mostly Filipin@ AWOC. Meetings would start with unity clap to help bridge the language differences. Artnelson begins each of his classes with the unity clap. 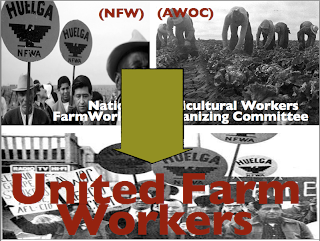 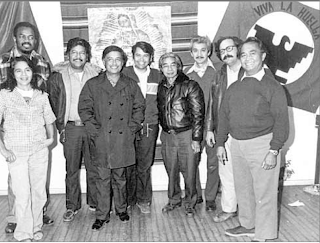 Isang bagsak literally means "one down." Someone shouts isang bagsak and everyone claps once simultaneously. Dalawang bagsak gets two claps. This started with the non-violent revolution in the Philippines to overthrow the Marcos regime and the idea is that if one falls, all of us fall. 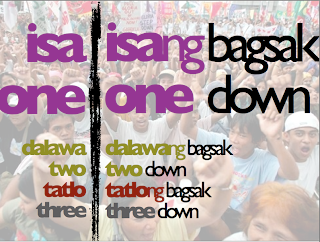 Now compare Art's class to this Teaching Channel video on attention getters. If you click through the video is embedded, otherwise here's a direct link.

Listen to the words Nick Romagnolo uses. He talks about catching kids to see who is listening and of "programming" them.


_____
Related: In Skills Practice, Christopher Danielson contrasted two videos of math teaching. A lot of the defense of the EDI video were comments about how the strategies themselves were good. My question is not about the strategies themselves but the intention of those strategies. Are they intended to honor the thinking of students? To create community? Or are they intended to ensure duplication?
Posted by Jason Buell at 10:25 PM 2 comments:

Email ThisBlogThis!Share to TwitterShare to FacebookShare to Pinterest
Labels: itccrj

This is one of those posts bloggers do to remind themselves of changes to make for next year. Nothing to see here. Move along.


At the end of the year one of the things I do is go to Target and buy 100s of Thank You cards. I think the pack I bought this year was $2.99 for 50. I ask students to write a thank you to a person at the school. It is usually a teacher but can be anyone. Our "student advisor" (AKA the huge guy that yanks kids out of class) gets a lot of cards as do the people that run the afterschool program. My only rule is that it can't be to me. Some kids do only one. I think this year one student wrote five. Then I drop them in mailboxes. It's a nice thing, especially for the 6th grade teachers who assume they have been forgotten.

I showed my students the Neil Tyson "Most Astounding Fact" video as the introduction and mentioned that this is where my introduction came from. Since I asked them to write Thank Yous yesterday I also included a thank you. Then I just gave them the letter. Like Sam, ideally I'd like students to keep it in their yearbook and randomly stumble on it every few years.

I tried to keep it to one page because I'm not entirely sure 8th graders will read even that much.

I over-edited and the transitions are ugly. I also took out the more personal stuff in favor of broader stuff. I think that was a mistake. I should have definitely left in, "Future classes will look up at the ceiling, see the smoke stains, and know that we were here."