One of my focuses for the year has been to develop better scientific discourse between students. My teacher-student interactions have progressed beyond Initiation-Response-Evaluation but I don't think my students have high quality conversations and I've been working on structuring more conversations.1

There are two areas I've been concentrating on - questioning and rebuttals. The first method I've been using is called Guided Reciprocal Peer Questioning from Alison King. I've tried it a few times and have tinkered a bit as I've gone. The basic routine is:


I really like the question frames. This example is from a different article and lists the type of thinking the question is designed to promote. 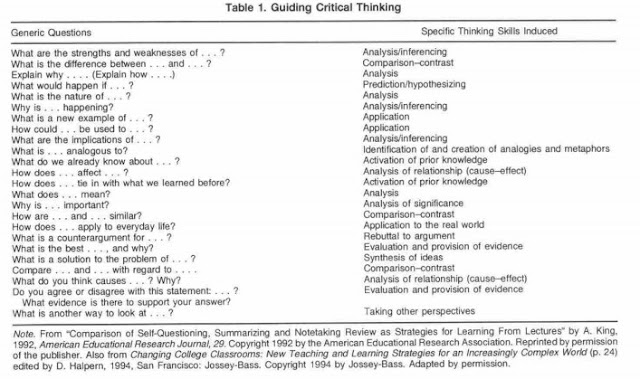 For my last unit (about construction in earthquake zones) my students got a list of fifteen of the question frames. They used the frames to write two questions each using two different frames. I give them a chance to read the frames over first and ask questions about any of the frames that are unclear. They take turns asking and answering the questions in their groups. I had them record the best answer which I defined as the consensus of the group rather than the best individual answer.

I didn't want to overly structure the discussion by forcing turn taking but I also didn't want "everyone turn and wait for the 4.0 student to answer." This time I had students keep track using tally marks at the bottom of their sheet whenever a group member made a "positive contribution." It didn't have to be correct but it had to be something that moved the conversation forward. I tried to emphasize the goal being equity and the questioner had a responsibility to directly include another student in the conversation if he/she noticed that student had contributed little. I had mixed results. I noticed a few of the quieter kids brought into the conversation. I also noticed my achievers racing to "win" the discussion points. I'll continue to play with this part.

Overall I like the process. There were some good breakthroughs in the discussions and I like the practice of having students generate questions. In the future I might try requiring group members to all select different frames. From what I've read, the original method was intended to be used after every lecture so it became part of the routine. I haven't made it a regular part of the routine but I've been happy with their progress. The best thing I've seen so far is that in the beginning, my students would write questions that they could answer themselves. They treated it like they were testing their group members. I've seen a gradual shift to actual discussion where students are asking things they're genuinely confused or curious about.

1: I do think this is largely part of the culture of a school. Students are usually taught to look to the teacher for answers.
Posted by Jason Buell at 2:54 PM No comments: