First off, the best writer on inquiry might be an electronics teacher at a technical school in the far reaches of Canada. If you haven't checked her blog yet (despite my multiple recommendations), do so now and thank me later.

I wanted to get down some things I've been thinking about with argument and specifically with Reasoning in the Claim Evidence Reasoning format that I use. It's pretty fuzzy still.

In an earlier post I cited Berland and Reiser's three reasons for making a scientific explanation:


This year I've been reflecting on the changes I need to make to how my class approaches a written or verbal explanation depending on which of these three purposes is our focus.

Reasoning is hard. There's no getting around that. I think I've been making it harder on my students though because I've been using "reasoning" as an umbrella term for "the part that requires a lot of thinking." Brian, as always, was ahead of me here when he commented on the distinction between argument and explanation.

What I've been learning is that I need to be more explicit (ongoing theme alert!) and identify for my students what reasoning means in context.

When we're engaged in a launch activity and students are using evidence to construct a claim, they're primarily focused on sensemaking. In this case, when I ask them for their reasoning, I'm really asking them to explicitly connect their evidence and claim in a consistent manner. I would expect my students to explain the patterns in their data and what those patterns might mean.

In a written prompt or lab practicum, I'm asking students to articulate their content knowledge. This is a test of what you've learned so far. In this case, when I say reasoning what I really expect is for my students to link scientific principals from class to whatever is on the page in front of them.

In whole class discussion and whiteboarding roundtables, we're engaged in persuading. Depending on the context, I would expect some combination of the above. But I would also expect you to directly address the opposing viewpoint and explain why your claim is better in some way.

It's also important for middle schoolers, and probably all ages, to understand that these different types of reasoning wouldn't just differ in content, but also in language. Google around and you can find lists of words that would appear in persuasive writing and expository writing. I use a lot of sentence frames and starters, but it's also a good self-check for students to go back and look for certain key words. I've got a couple of examples I'll put up in future posts.

Email ThisBlogThis!Share to TwitterShare to FacebookShare to Pinterest
Labels: argument

Here's something I copied off a classroom wall at Mission HS.

Imagine it a lot prettier with stick figure examples.

I don't differentiate between these three very well (at all) with my students. The always insightful Grace also pointed out to me that it helps the teacher differentiate the three types of activities. Often a teacher calls something "group work" but what it really is just students working in parallel. It's one of those "no duh" moments I always have when I walk into someone else's classroom.

Addendum: Something I forgot to mention in my last post. Mission HS is experimenting with Geometry for every 9th grader regardless of whether or not they even took Algebra in 8th grade. During the class they emphasize the algebra components within geometry, mainly working with the coordinate plane, graphs, and solving equations. As sophomores, students then go back to either taking Algebra or Advanced Algebra.

They had a whole bunch of interesting reasons. They felt students could use a fresh start and didn't need their math history to haunt them into high school. Geometry itself is so different that perhaps students who hadn't had success in math would find something in geometry. Their freshman courses were heavily skewed along racial lines. The standard math sequence is screwy anyway since you'd be better off doing Advanced Algebra (Alg II) immediately after Algebra instead of having a year off with Geometry.

I'm curious to follow up next year. Last year I wrote about how inspiring the group of math teachers are and nothing I saw changes my opinion. I really don't know if Geometry for all ninth graders is a good idea. Someone in California politics thought Algebra for every 8th grader was a good idea. But they're willing to stick their necks out and experiment and do what they believe is the right thing.

PS - Mission is the school featured in the article Everything You've Heard About Failing Schools is Wrong.
Posted by Jason Buell at 8:22 AM 1 comment: 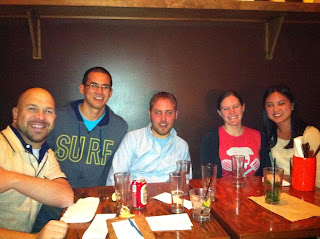 Posted by Jason Buell at 9:52 PM No comments: