1. Twitter Math Camp is July 19-22 in St. Louis. It's exactly what it sounds like. Some math teachers on twitter decided to get together, work on some math problems, and teach each other all sorts of stuff. It's free, small, and low key.  Think edcamp rather than NCTM.

2. Math52 is a Kickstarter from Mathalicious. If you pledge $52 you get an entire year's membership to Mathalicious.

3. Frank Noschese has a TEDxNYED talk up called Learning Science by Doing Science.


One request:
1. My schedule for next year is half 8th grade physical science (what I have always have taught) and half 6th grade (ack!) earth science (double ack!).


The California standards for sixth grade (page 27) are all earth and no space. I'm not too worried about the day to day (unless of course you have a killer lesson/unit you're dying to share) but more about the approach. I'm not sure how to lay this whole thing out so it flows together. My natural inclination is to build everything around the concepts of systems and cycles but really I don't know. In the pre-blogotwittersphere era I would have needed to teach the whole year to figure out how to fit everything together. I'm hoping to shortcut that process using all of you. If it helps, this is a non-tested subject so I have much more freedom to emphasize/de-emphasize certain parts of the curriculum.

Thanks for the help.

Email ThisBlogThis!Share to TwitterShare to FacebookShare to Pinterest
Labels: sharing

I'm writing a series about the different sessions at the ASCD virtual conference. My notes on last year's conference are here.

Full disclosure: ASCD is paying me for the posts but I paid for the conference myself. I'm coming out ahead in this transaction but the lifetime flow of money is still in their favor.

The first post is on Doug Fisher and Nancy Frey's Purposeful Classroom. Fun times. If you're a regular reader you will appreciate how difficult it was for me to keep my word count down.

Fisher says they made a shift from "objectives" to "purpose"in order to include the idea of relevance. He says that relevance can be in three areas. Learning that has use outside of the classroom walls. Learning that gives a student opportunities to learn about oneself as a learner. Learning that is necessary for citizens in a democratic society. It's an interesting lens. I haven't thought about relevance enough to decide what I'd add, subtract, or modify from that list.

Fisher also commented on the Gradual Release of Responsibility model. He said the number one clarification he'd like to make is that GRR isn't meant to be a step-by-step recipe. You don't have to do it in exact order, just that the phases of GRR should all occur during a lesson. He doesn't make it clear in the talk but a lesson in this case doesn't necessarily mean one class period. This is an incredibly important point and was lost on the people who lead the GRR training the first time I heard about it.

Another important point was the difference between independent practice at home and in the classroom. He said that we give homework too early in the learning cycle. Students aren't ready to immediately apply homework.

They also shared two rubrics I thought were interesting starting points. A modeling and purpose rubric and a rubric showing indicators of success at establishing purpose.

Last: I've heard criticism of writers like Fisher and Frey for not being "transformational" enough. I get that. They're not. I classify them as "Better Now" types. They want to help teachers to improve what we're doing right now as opposed to razing the whole school system and starting over. Both types of writers have their place but I spend much more time reading and learning from the Better Nows. It's fun to think about what my ideal school would look like but I'm far more concerned with helping the kids that are in front of me each day.

Email ThisBlogThis!Share to TwitterShare to FacebookShare to Pinterest
Labels: ASCD12 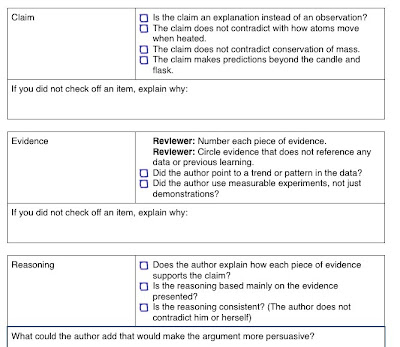 
In Making sense of argumentation and explanation by Berland and Reiser, the authors argue that scientific explanations have three purposes: 1. sensemaking, 2. articulating, 3. persuading.

I like these. A lot. The authors don't treat these three purposes as separate domains but argue that each of these serve to strengthen the other.

Other than being really interesting, why is this relevant? From page 31:


We suggest that viewing student work in terms of these three instructional goals can clarify students' successes and challenges in constructing and defining scientific explanations and consequently inform the design of supports for this practice......we suggest that each aspect of the practice may require different types of support for students.

This has very broad implications about everything from assessment to scaffolds to how to structure the entire class. The authors studied the CER framework and decided it was good for purpose 1 and 2 but not so much for 3. My personal experience backs that up. From the abstract:


If someone were to ask me what the three legged stool of science education is, as of May 2012 at least, I'd say content knowledge, inquiry, and argument.  You can't have a complete science education without all three.

In science education, argument is our weakest area. I know for me, it wasn't even something I thought about until last year.

This is my way of qualifying any suggestions I have. I'm still new at this. I don't have a lot to offer.

What I can tell you is that if you want students to engage in argumentation, you need to give them something to argue about. Sounds obvious right? But if I explain a topic, then we do a confirmation lab, and then I expect students to engage in argument about that topic, I'm setting myself up for all sorts of disappointment. I haven't given them anything to argue about. I've just given them an opportunity to show me how well they've memorized what I've said.


I've got three other suggestions which I'll break into the next post.
Posted by Jason Buell at 8:19 AM 4 comments: