This is about honesty.

I went to a conference last week at Stanford. One of the panels was on equity. Hey! I just went to a whole conference on equity. There were five people on the panel. Three came from organizations that deal with policy and research. The two people who were actually educators were from Rocketship Education and a Los Altos school.

Some background for people not living in the Silicon Valley.

Rocketship is well known locally for its blended learning model and for its very high API scores with a high poverty, high English learner population. It is also well known locally for its high dropout rate and for avoiding the local school districts and going directly to the county office for approval of expanding to 30 schools. It's also well funded and if I'm reading this financial report (pdf) correctly, it gets about 30% of its money from "contributions." 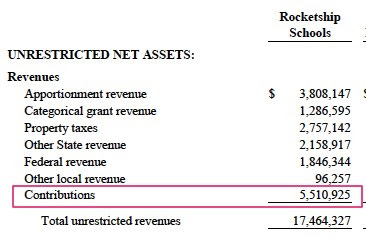 Los Altos is one of the wealthiest areas in the nation. Actually, according to this Yahoo Finance article, it is (or at least it was three years ago) the third wealthiest. The school being represented has a 978 API (out of 1000), 4% of its students are on free and reduced lunch (state average is 52%) and 4% of its students are English language learners (24% state average). This year, its educational foundation donated over $2 million dollars to its 9 schools.

Two extraordinarily wealthy schools, one through geography and the other through donations, were picked to talk about equity. Especially when, hypothetically of course, a primary argument that may or may not have been put forth is that money doesn't matter.

So why might these conference organizers choose two educators from schools that might not be the best representatives to talk about equity?

I surfed over to the NewSchools Venture Fund website and clicked on Our Ventures to see where their money was going. 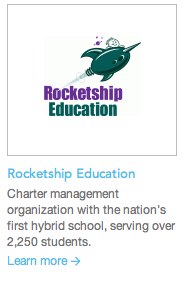 and sitting on the Rocketship Education Board.... 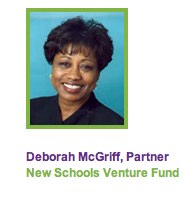 But what about the Los Altos school? She was actually there to talk about Khan Academy. It turns out she's from a pilot school.

Three lines above the Rocketship sponsorship on the NewSchools funding page you get...... 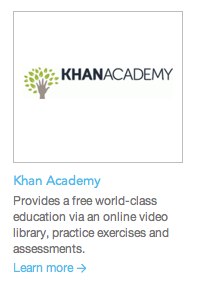 I have no idea if NewSchools (or SVEF who also partners with Khan) had an agenda. I doubt it. I think its likely these were just the first two groups that came to mind because they work so closely with them.

The credibility issue is killer though. I had a hard time listening to anything after this panel.

The sad thing is I would have been happy to have sat in on a presentation about Khan in the classroom and what Rocketship is doing with blended learning and their data monitoring system. I felt like the organizers were hiding something by sticking them into an equity panel.

Does every conference have to be sponsor-free like Creating Balance? Heck no. I enjoyed the ASCD conference immensely and it was like a NASCAR race. I expected Pearson to come out shooting a t-shirt cannon between sessions. I don't even want to know what went on in the Smart Board party bus.

I don't have a problem with that. I know conferences don't pay for themselves. I'm happy to ignore the vendor tables if it is going to bring my registration fees down.

Just be honest. If I'm going to sit in an hour-long advertisement, let me know ahead of time.

(Final note: I've been sitting on this post for a few days. I didn't want it to seem like I was specifically targeting the parties involved. I want it clear that I'm just using them as an example and the point is really about transparency. It could have been anyone.)
Posted by Jason Buell at 12:57 PM