I'm sharing this paper for two reasons. First, the suggested modifications require close to zero added instructional time and energy. Always a win. Second, it is a good illustration of one of the reasons I read so much research. I don't consider myself an instinctive teacher. Many of you will read this and be like, "Well.....duh." Me? Not so much. I have to put deliberate effort into improving what I do and stuff like this isn't as obvious to me (until I read it) as I'd like it to be.

Worked examples are something that most teachers use. They've got a low instructional cost, both in terms of time and energy. When students are working on solving problems in class, I will tape a few answer keys will the problems worked out around the room so they can check when they're done or when they're stuck. It's effective. The problem is that worked examples, while very good for near transfer (problems that are similar to the example) have been pretty disastrous for far transfer. Which totally makes sense since usually students are learning steps rather than engaging in the problem.

The researchers did two specific things to improve upon the standard work example.

Fading: The steps in the worked examples would be removed in reverse order. So the last step would be removed, followed by the second to last step, and so forth until the student did not need the examples anymore. Makes total sense but not something I normally do. My problem solving scaffolds go from the full structure (entire worked example) to being completely removed (solving independently). In an earlier study, one of the authors (Renkl) found that this worked well for near transfer but not for far. This study in the paper was designed to help remediate this problem. 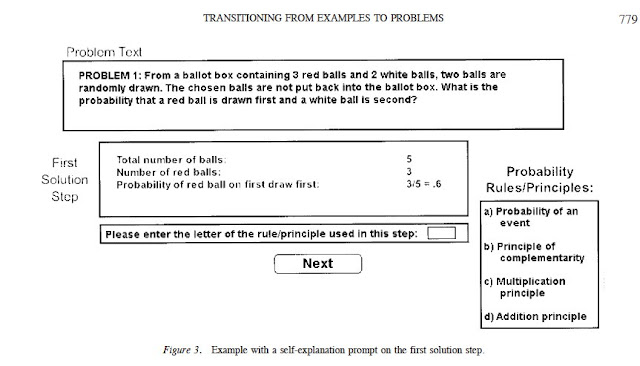 Adding this prompt increased both near transfer and far transfer when compared with just backward fading.

There's an interesting discussion at the end of the paper about cognitive load. Previous researchers found mixed results for similar treatments. The authors speculated that cognitive load may be an issue. In one study, the examples were spread out over multiple pages and in another participants were asked to type in the principles rather than just selecting them.

Cognitive load theory is interesting but often misapplied. But that's a post for another day.
Posted by Jason Buell at 3:00 PM

Email ThisBlogThis!Share to TwitterShare to FacebookShare to Pinterest
Labels: edresearch