Compare and Contrast with SET

As a department we've decided to focus this trimester on two thinking skills: Classifying and Compare/Contrast. All this really means is 1) It's going on our common assessment and 2) We're planning to throw those two things at the kids whenever possible. My kids are fresh off 7th grade life science, which is all about classifying (angiosperm or gymnosperm? eukaryote or prokaryote?) so they're pretty strong on that. Asking them to actually create their own criteria usually throws them off for awhile but they get the hang of it pretty fast.

Compare and contrast is a different beast. I'm not sure why, but it's something we've always struggled through. This year, I'm using the game SET to introduce it.

SET is pretty common in math classrooms, they even have a resources for teachers page. I'm sure Sue VanHattum has a few extra decks around her living room.

In the interest of not spending $96 on 8 decks of SET I used Keynote '08 to make a version. I'm just going to color print and laminate them. I'm not a designer in any way so if you're interested in making a better version I fully support that and will post yours.

I was too lazy to figure out how to make the squiggly character so I made rectangles instead. I also changed the colors.

Set
Edit: Scribd is pretty much the worst thing ever so if it's not showing just click through and it'll work. I had to zip the keynote file because I can't figure out how to get box.net or dropbox to share them. Here it is if you want to edit.

Mine prints out in landscape automatically.

Here are the rules for the uninitiated. It's the simplified version. Normally there are different shadings (striped, solid, outlined).

If you're playing the full version, 12 cards are on the table.


What's a set? Each card has three features: Shape, Color, and Number. In order to make a set, each feature must be the same on every card or different on every card. If you go try out the Daily Puzzle it makes a lot more sense.

I had written out a whole tutorial but found these screens here, which are much better. These are a set: 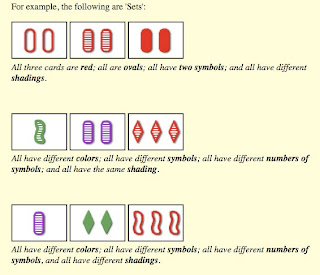 These are NOT sets: 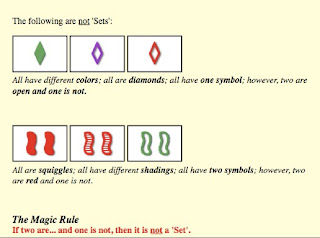 It helps if students go through three questions:
So here's the flow.

First day I introduce the rules and just let them play. Although the box says it's suitable for ages 6 and over, the thinking behind this is difficult at first so it'll take awhile for kids to get it.

Second day we play a little more. Then I formalize it. I like to use a comparison matrix for compare/contrast. Venns don't really do it for me although bubble maps are alright.1  After a little play I put this on each of their tables: 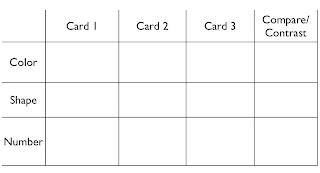 Mid-game they stop and take one set (3 cards). They put one card over each spot on the top then fill in the boxes for each attribute. The far right box they write a sentence, "Card 1 has a squiggle, Card 2 has a........All of the cards have different shapes."

After the game is finished I ask them to shuffle the deck and pull out three random cards. They fill out the comparison matrix again and use it to decide if it's a set or not.

Update: Here's a full version in pdf and keynote. I wrote a followup post too.

1: The problem with Venns is they're not forced to compare specific attributes. I get things like, "Dogs bark. Cats like tuna." umm...ok.
Posted by Jason Buell at 10:55 PM

Email ThisBlogThis!Share to TwitterShare to FacebookShare to Pinterest
Labels: recordkeeping