SBG Implementation: Setting up the Gradebook

If you've been following along, you've already created your topic scales, designed assessments, and tracked progress.

Next we're going to actually input scores into our gradebook.

Most of our gradebooks were designed for traditional assessments only. You give points for assignments and they're averaged for the final grade. Mine does that too. There are a few programs out there that are supposed to be compatible with standards-based grading, like Global Scholar. I have zero experience with those, other than sitting through a few sales pitches, so I can't vouch for how those work in practice. You can also follow along with Shawn or Riley or the Science Goddess and see how they're doing creating their own.

I haven't hit on the one-tracker-to-rule-them-all. As such, I've got a bunch of different systems that kind of do what I want but none of them are quite perfect. I use/have used three methods for recording scores before they ultimately get recorded into my online gradebook.
I still go old school with the paper gradebook. A picture would be ideal here but my scanner is currently on the fritz. It looks like a standard gradebook except that instead of each student name getting a single row, each name gets five rows. Instead writing down assignments I give another five columns to a topic and record scores as I see fit. I circle the score when I feel they've reached that level. A single class will take multiple pages in your gradebook. I don't record the specific assignment that was attached to each score. I used to have a coding system for the type of assessment but was terrible at doing it so I stopped. I can regularly record scores and comments but not much else.

I use the sticky notes to jot down quick reminders of conversations I've had with the kids. In standards-based grading the assessment type is usually irrelevant.You'll find the conversations with your kids are incredibly valuable and you'll want to write stuff down. In my best times, I can keep little notes while they're doing labs or working out problems. Often I just scribble down a few notes after the bell rings. They say things like, "Still confusing speed and velocity." or "Gets light years" or "Double check can calculate density." One of the most valuable things I've found to keep track of is who's helping whom. The kid who's always explaining things to the rest of his group knows what's going on.

The Science Goddess's excel workbook is just like mine if mine went through a few cycles of the Barry Bonds workout enhancement system. I only include overall topic scores and use conditional formatting (Green for 3/4, Yellow for 2, Red for less than 2) to keep track. I also include a column named named Proficient in All Standards and an IF-THEN formula runs through and marks yes/no if they have at least a 3 in every topic.

There are bar graphs showing the number of students scoring at each level by topic. 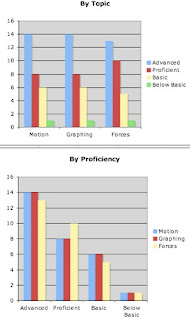 Lest you think I'm a master teacher, this is my second highest performing class. I have a class that's the mirror image of this one.

Setting up the Gradebook
Here's a snapshot of my gradebook. Here's Matt's.

We use PowerSchool. It looks like it's also called PowerTeacher Gradebook.

If your gradebook says Wksht Ch1.2 or Midterm, that's not so helpful.

In my gradebook I have tried to decouple the assignment from the learning wherever possible.


Instead of using categories like Quizzes, Labs, Classwork, I named each category after a topic. 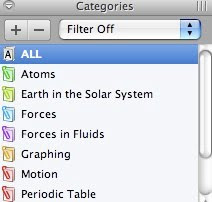 I enter in scores by time, rather than by assignment. This is new this year. I moved to entering in a score every Friday instead of a score for some sort of specific assessment.1 Using the old method, when a student or parent looked online and saw a low score, they immediately wanted to make up/redo that specific assignment, whether it was a test or lab or classwork. They were focusing on the assignment rather than the learning goal. By removing the assignment entirely, I forced them to focus on the learning goal.

Additionally, differentiation is hard enough as it is. Don't make it even harder by trying to figure out how to enter grades 30 students who are working on 30 different things.2

I've changed the naming conventions over the year because of how PowerSchool formats it when I look at the gradebook. At the end of my first week teaching a new topic I'll put in something like Graphing Progress Check 1. The next week I'll put in Graphing Progress Check 2. I may simultaneously be entering a score for Motion Progress Check 4. This score is purely for reporting purposes and is zero weighted. On a good day, I can leave a comment on the score stating which particular standards they have mastered or need to work on. If you're one of those people building a gradebook, allow me to import a list of standards, attach them to a student, and check them off.

I keep track of their current level in a particular topic using Motion Topic Score or Graphing Topic Score. I overwrite this one when I see fit. I don't have an algorithm for when this gets overwritten. I err on the conservative side and I need to be pretty sure before I will overwrite a score. This may take multiple assessments but doesn't always take multiple weeks. A student might have weekly progress that looks like 1,1,2,2 but then the Topic Score is 3 because they blew me away this week. In case you're wondering, yes, I do lower my scores.

When viewed online, parents or students can click on the Final Topic Score and see a quickie version of the 4-point scale.

I like this combination of progress checks and topic scores because it keeps the record of learning intact while allowing me to not be confined by either averaging the scores or using the most current score; both of which I think have serious drawbacks.

I really wish I could display the scores by topic, instead of chronologically. Our "update" over the summer to the java version only lets us view the scores chronologically. We used to be able to sort them by category which was much better and made more sense for this method. If you have the java version of PowerSchool and know how to do this, let me know. If I can't figure out how to list them by category, I think I'm just going to fudge the due dates next year.

Final note: I can't possibly emphasize enough how much of a critical change it was for me to remove assignments entirely from my gradebook. You will encounter two situations fairly frequently once you fully embrace a standards-based system. One, your students will pick what they need to work on and will be doing something completely different from the person next to them. I anxiously await the day I can tweet that I had 30 students working on 30 different things. As of now, 6 or 7 different things is reasonably common and 3 or 4 different things is the norm. Two, you'll have one student who needs 10 different assessments for a single standard and another who showed clear mastery on the pre-test. Your online gradebook is not designed to accommodate either of those situations. Do not waste your time trying to figure out how to enter all those different grades in and then trying to explain to parents why Matthew has an A but 40% of his assignments are blank scores.

As always, leave any improvements or clarifications in the comments. I'm wrapping up this series soon. Thank you for the good comments and support. If there are any specific issues you'd like addressed - twitter, email, comment.

1: I just realized that the snapshot I used isn't spaced out weekly. The rest of the scores are pretty evenly spaced. I have no idea what I was doing with graphing.
2: It is unfortunate that grading program creators think that all students in a class will always be doing the exact same assignment on the exact same day worth the exact same amount. It is more unfortunate that this is usually true.
Posted by Jason Buell at 12:09 AM