I had to turn in my laptop so I've been largely stuck on an iPad at home. The result has been my consumption has gone way up and my production has gone way down. Something to think about if you're considering tablets for your classroom. Right now I've just got some links to share. Like always, this will be twice as long as it needs to be.

My blog post, Test Deconstruction, was cleaned up and published in ASCD Express. Thanks to Laura Varlas for that.

Stephen Lazar wrote a fantastic piece in the NY Times Schoolbook on school reform. I love everything about it. I'm pulling out two quotes:


I used to think we needed to create model schools that could then be replicated. I now think that it is so hard to sustain a model that each school needs to be invested in its own unique vision.

I went to a conference this week and tweeted this:

I dislike the concept of "incubator schools" so much. First, what are the rest of the schools doing? Just sitting around waiting to be told what "works"? Second, like Stephen says, the whole idea of "scaling" has been pretty well debunked.


Last good one is this set of questions from Federal Way schools called, "How to talk about Standards Based Grading." I like how they included questions for parents to ask teachers. I would have liked it even more if they included something to help students talk to teachers.


Joanne Jacobs, who somehow lives a few miles from me but occupies an entirely different planet, posted a story about a bunch of kids who quit their varsity basketball team. The coach felt they were disrespectful. The kids felt the coach wasn't respecting them in the first place. The news article doesn't offer too much more information than that. She closes with:


Lesson not learned, apparently.  Good luck in your first job, Eddie. And your second job. And, if you continue to be a slow learner, your third job.

1. Joanne apparently wants kids to learn the lesson that, "You take whatever your boss says and does no matter what."

2. What I CANNOT STAND is how we as adults automatically take the side of the other adult. I grew up playing sports and I've had plenty of jerk coaches. I've also been disrespectful as a player. As far as I'm concerned, the kids had a right to quit and the coach had a right to cut them. I don't have any more information to decide anything else. There's no reason to put all the blame on the kids and yes, I'm really talking about how we automatically take the sides of adults in our schools without even listening to the kids.


(Update: Local writer defends the students here and has a copy of a letter sent to the principal from the team.)


The other link I have to share I'm not actually going to share. I think he's a racist and I have no interest in even accidentally sending one of you over there. On the other hand, his traffic is at least a couple orders of magnitude higher than mine so you might know who I'm talking about anyway. He shared the ETS report  that includes this graph on page 22: 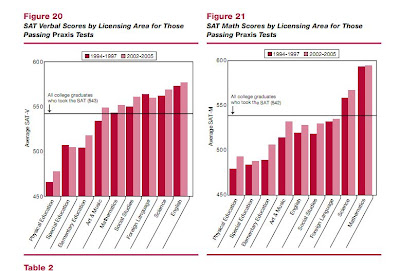 and then this quote:


My guess is that smarter teachers would probably be a good thing, so we ought to be thinking about ways to make the job of teaching more attractive to smart people. In general, smart people don't like dealing with knuckleheads, so forcing teachers to carry most of the burden of discipline, a growing trend in recent decades, is a good way to keep smart people out of the business. You can instead use some of those gym teachers to run after school detentions instead of delegating most of the disciplining down to the teachers as happens in so many public schools desperate to avoid disparate impact lawsuits by not generating a paper trail of discipline actions carried out by the administration.

....
deep breath
....
give me another second
...
I'm going to ignore the gym teacher comment because if you're at my blog you already know how ridiculous that is. Also I'm going to ignore the logical conclusion that people who aren't smart enjoy "dealing with knuckleheads." And also I'm also going to ignore that this report comes from a company that has a vested interest in making us think that educational testing matters.

What I will mention is this idea that smarter teachers equals better teachers.

Disclaimer: I'm not Grace, but I did score high enough on my SATs to be off of both of those scales so I don't think this is sour grapes when I say that it's quite a reach to first link SAT score to IQ and then IQ to teaching ability. This is a classic example of someone with an agenda taking some data and making it tell the story he wants it to tell. If you start off with, "My guess is....." you're not allowed to follow it up with such certainty. I'm going to counter with more graphs: 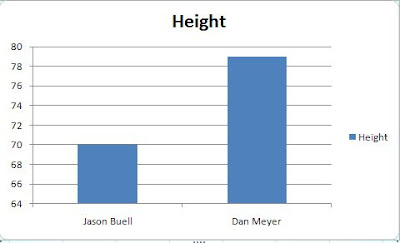 Clearly the way to be a better blogger is to be taller. Wait. I can do better than the unnamed blogger. CORRELATION SUCKAS! 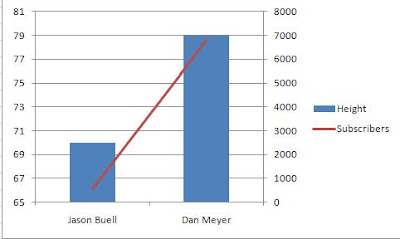 My guess is....tall bloggers would be a good thing, so we ought to be thinking about ways to make blogging more attractive to tall people.
Posted by Jason Buell at 10:33 PM

Email ThisBlogThis!Share to TwitterShare to FacebookShare to Pinterest
Labels: links